From Anchorage to Ramstein

I’m sitting in the cockpit of a C-130 from Georgia.  It’s being flown by a Guard unit called the Savannah Guard Dogs.  Nice guys—they offered to let me sit upfront so took them up on it.  Yay.  Here I sit with my M9 by my side, wearing my gortex jacket, earplugs in and I’m chewing orbit gum—even though I look like a big tree, my teeth look fabulous!

Anyway, there’s a problem with a gauge so we’re waiting for a replacement part.  Apparently, engine 3 keeps reading too high of a temp and they’ve narrowed it down to a gauge, hopefully that’s the fix and we’ll be off soon.  I am ready to get this party started.  Your deployment days do not count until you are in-country.  I enjoyed my short stop in Georgia with my “other parents” (my friend Katie’s folks took good care of me).  When you are in the military you have friends, friends of friends or parents of friends in nearly every state.  On this trip, Katie’s mom (Sandy) was delighted to show me her newly renovated kitchen.  Dad was equally pleased since he knows how happy she was about this long-awaited project.

Our flight to Germany went well.  When we arrived, we were all put up in a billeting space that was used strictly for troops in transit.  I think they did this to keep the cost down since we all shared rooms and there appeared to be very few niceties such as coffee machines and TVs.  No one seemed to mind since we were still in Germany and could drink beer and drink beer.  For my 3 day layover I enjoyed the schnitzel, rumpsteak with garlic butter, bib lettuce (dang the Germans can make a yummy salad), pomme frits and, of course, the weizen bier.  (FYI, our weapons were safely locked up in the armory the entire 3 days.)  In addition to feasting and drinking, I had the pleasure of reconnecting with a friend I had not seen in years–someone I knew in a past life and was excited to see again.  Tracy and I were Airmen together–she was stationed in Northern Germany and I was in Belgium (in the 1880’s my daughter would say).  Now she is married and they have an adorable little girl (Darian) whom I was privileged to meet.  (fast forward–she’s all grown up and ridiculously beautiful & smart like her hot momma.)  We hit it off just fine. 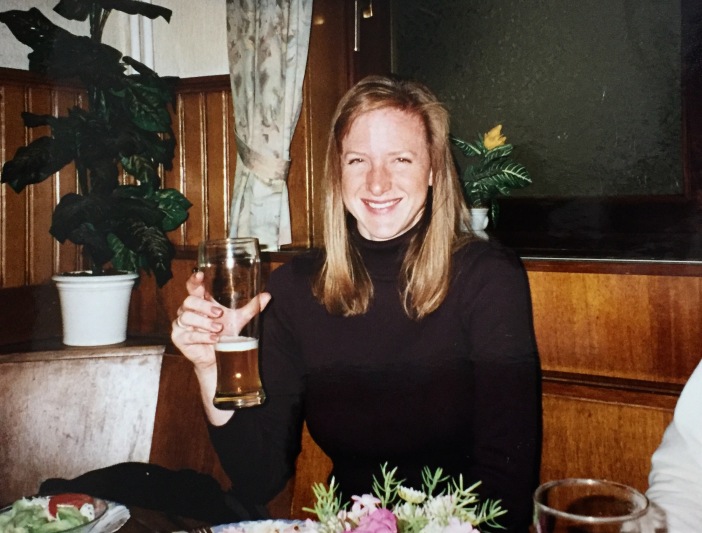 Upon arrival to Tuzla Air Base, I was greeted by “Michelle” (the woman who called me her new best friend—I was replacing her), who showed me to my hooch.  Its late, I’m exhausted and I’m going to bed now.  Tucked in my well-worn, twin-sized bed I can say it’s not too bad.  My room is about 20’x20’ and has a TV, VCR, DVD player, a medium size fridge, microwave, little couch, table and chairs, and 4 x large lockers.  Michelle was nice enough to give me her room right next to the bathrooms so I only need to take a couple of steps to the shower/toilet/sinks.  She moved into a temporary room until she leaves next week.

Joan of Arc (my patron saint) is on the TV right now, how poetic.  I’ll watch her until my eyes close, which won’t be much longer.

Fast Forward:  I remember feeling comfy in my little nest when I lived in this hooch.  The mission was winding down so everyone had private rooms on the Air Force side of the base.  I would soon see how the Army lived—in tents with a minimum of 8 Soldiers to each tent (didn’t matter if you were an officer or enlisted).  On the flip side, it got lonely in that room too and although I wouldn’t have traded my shitty twin bed for a shittier cot, it was probably comforting to have people around you day and night.  You could get into your head enough on these deployments without the benefit of solitude.