As we drink tea, Yasen tells Sampat Pal about the NGO that Afroja is working for in Khajuraho and the two women begin to talk about the horrors of child brides. Although I don’t understand Hindi, I know they are talking about their common goals and how they both wish to change the culture that accepts child brides. It is law that no woman can marry before she is 18; however, the authorities, especially in small, poor villages like Aterra, very commonly overlook it. Sampat was married at age 12 and she was forced to live with her new husband and his family as soon as she went through puberty. (I read about this in her book, we didn’t speak of it now.) Her husband is in the room and is clearly submissive…or has become submissive over time. I’m sure anyone would expect as much from a woman who beats strangers with bamboo sticks until they agree to behave.   I am happy that the women are connecting and have mutual respect and I wonder if maybe this is the true reason for my trip—to connect people. Perhaps.

When tea is finished, Chandra asks to use the toilet and I watch her walk to the back of the house. I am wondering what is back there? Is it a proper room with a hole in ground? Is it just the back of the yard? I don’t want to find out because it is blistering hot and must smell like death back there. I am still pleasantly surprised that not one person that I have come across has any body odor. This may sound silly but after living in Europe for 6 years, one does not take such pleasantries lightly. I remember how much I hated going into a post office in Belgium in the summer because the body odor smell was so thick you could taste it. I will always have that smell registered in my brain—some things you never forget. Honestly, not one person I’ve met in India has had any bad smell in spite of the fact they have no running water—shocking. Perhaps my senses have simply dulled over the years?

Back to my conundrum here…do I begin jotting notes and photographing this woman or do I leave with my tail between my legs and chalk it up as another lesson learned? As I am thinking, Sampat asks me if I would like to photograph her now. We are now sitting in a hallway to avoid the sunlight and I’m very close to her. The light is beautiful but my angle is challenging—still, I came her to photograph her so I better get started! I take a few shots and a woman walks in with a problem for Sampat. She is one of her Gulabi Gang members (wearing pink, no less) and is visiting on behalf of another woman who is troubled. This woman looks very serious but Sampat is in no rush to get to her, she is hosting guests and will continue to do so until we depart. This makes me feel bad for the woman who is waiting. I ask her if I can photograph her too and she says yes but when I finish and ask everyone to sign model releases (so I can use these photographs for submissions) I have another problem. How do you get a model release from a woman who cannot read or write…she can’t even sign her name! Shit. Fortunately, Sampat was willing to let her teenage son read the form (I had it translated into Hindi before I came) and he gave Mamma the “ok” to sign her name. She is a proud woman and is determined to sign her name herself. Most women in her village could not accomplish such an academic feat. The other women would not try because they were embarrassed that they could not sign their names…which is why most countries simply have people use their fingerprints to identify themselves…duh.

When we finished taking a few photos, Sampat asks us to join her downstairs to see her computer so her son could show us her website and her office. She is very proud of her accomplishments and is happy to show off her trophies and certificates. We have now been here at least 2 hours and Chandra is hungry (I’m sure we all are hungry but she is young enough to say so). She unpacks some chapattis that grandmother made this morning (at 4am) and begins to snack on them. Everyone in India seems to travel with food! I love that. I wish I was as smart as them. Yasen hands me a chapatti to snack on and I graciously accept, even though I watched him picking dead skin off his feet for the past hour and not wash his hands before he handled the food (my sister would fricken die before she ate this chapatti). Sampat tells one of the children to bring us some drinks and one of the little girls walks in with a bottle of Mountain Dew. I’m thinking, “I hope it is cold and thank god it’s a soda so I can drink it without worrying about it being purified.”

We sit and smile in front of photo after photo of Sampat on the computer until we finally make our way out of the tiny office and back upstairs. We thank her for her time and explain that it is a 3-hour ride back to Khajuraho. I hand her a tiny, pink change purse filled with $100 in rupees and smile at her and she hugs me. It was not customary for her to hug me but I welcomed her gesture. I was very happy she hugged me and felt her warmth. She is so charismatic and strong but so gentle and loving too. She was much more approachable than I ever expected and gracious as ever. (I highly recommend reading the book “The Pink Sari Revolution” by Amana Fontanella-Khan if you want to learn more.)

Her tribe of children gathered around her to see us off as we loaded up in the hire-car and left for Khajuraho. It wasn’t the trip I imagined but more than I could have ever wanted. Now we are going to stop at some game reserve on the way home because Afroja said they have a beautiful restaurant with a view…I hope they have a clean toilet too, my stomach is starting to churn. 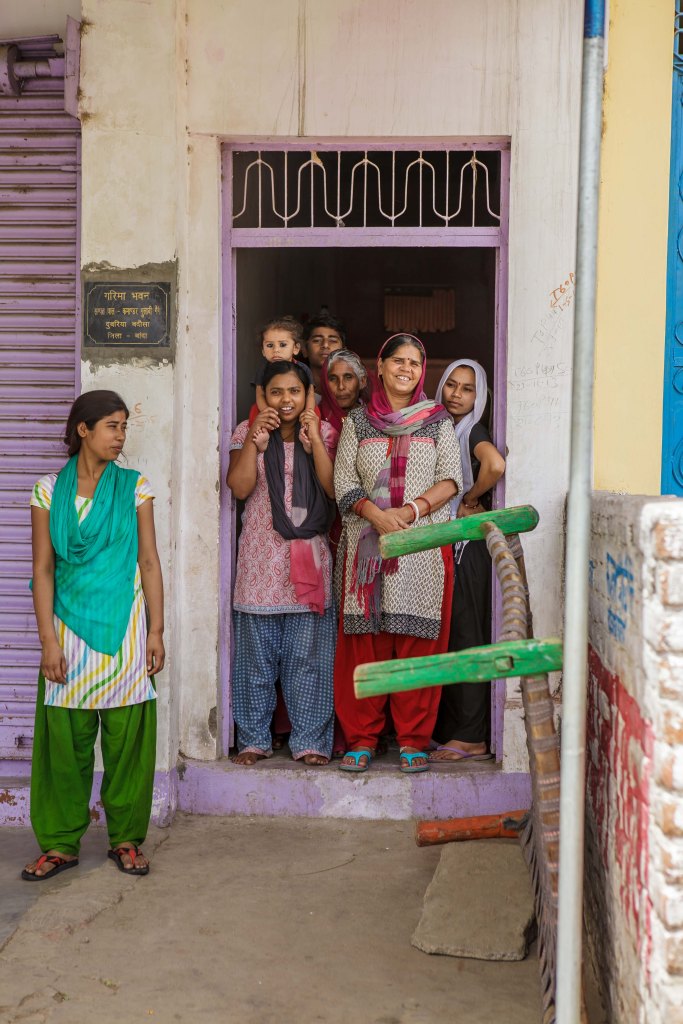