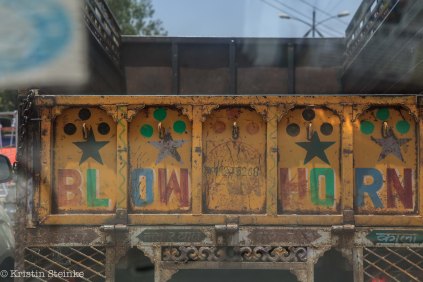 It’s Friday and the Taj Mahal is closed today so Hussein picked me up at the hotel with the promise of taking me sightseeing.  I told him I wanted to see the rescue elephants he mentioned so he took that to mean “she loves animals and wants to photograph all of them” argh.  The weather is insanely, brain-fryingly hot at 44 degrees celsius and an “air conditioned car” simply means that the fan works.

“Crystal, I take you to see animals today,” Hussein promises with a grin. Off we go, and go, and go…out of Agra proper and beyond.  Hmmm, are we going on safari?  Shit, I am in a taxi with a strange man and have only my camera to protect me.  Approximately 45 minutes later (after a few u-turns into oncoming traffic) we arrive at an animal sanctuary for sloth bears and birds (not elephants).  The place looks legitimate, pretty nice and well kept and we park near what appears to be a ranger station.  Hussein convinces the “ranger” to show us some sloth bears.  The 2 bears we see look great, as if they were on display at a nice zoo, albeit hot as hell (poor guys had to be suffering in this stifling heat).   Hussein kept ordering me to photograph the bears.  I am not, nor ever claimed to be a wildlife photog.  I photograph people and places, I’m interested in the stories, not the pretty scenes.  The most irritating thing you can say to a photographer is “take a picture of this!”

Drenched in sweat and ready to get back into the fan-conditioned car I indicated I was ready to leave.  Hussein instructed me to give the ranger a donation for his trouble, I complied and when we got into the car he smiled and said, “See, Crystal, I show you animals!”  “Yes, you did, thank you.” “No, you say, shukria to me.” (I later found out this means thank you in Urdu vs the Hindi word I learned which is “dan’yavada.”)  “Shukria, Hussein-ji,” I said to him and he grinned and told me that we were going to see elephants after we have lassi.  I had no idea what lassi was nor was I interested in having one (I fear drinks from street vendors) but I figured I haven’t been sick yet so why not give it a go.  He insisted that I try this drink and promised I would enjoy it and he was right.  It was a frothy, sweet drink that is apparently made of yogurt.  It is served very cold in a terra cotta cup that is immediately discarded (yes, thrown into the fricken trash can).  I balked at the thought of throwing away this perfectly good, probably hand crafted, terra cotta cup and he laughed at my naiveté.  How quaint!  “You are like Japanese tourist who kept cup for souvenir.” Well, Hussein, it seems ridiculously wasteful to discard a lovely and perfectly serviceable cup!  But, I didn’t want to put the messy cup in my camera bag so I gingerly placed it on top of hundreds of other cups in the heaving bin.  Such waste…  “You see, Crystal, I know what is good, you like lassi, you trust me now I show you good things.” “Yes, Hussein, shukria for lassi.” (while my inside voice is saying “ok, asshole, you got me to buy you a drink, now will you do your job and take me to the sanctuary you promised?”)

We finally arrive at the elephant sanctuary and it seemed absent of any people.  The place was very haphazardly set up with a dirt road entrance that led us to a lonely elephant.  My heart crumbled as I witnessed a beautiful beast tied down with rope around one leg.  He was clearly stimulated as I approached and he reached out to me with his trunk through the bars.  I touched his outstretched trunk and he grabbed my hand and pulled me close to him.  I was a bit spooked–they really can grab your hand hard–and pulled back.  It was a connection but seemed sad and desperate, not happy and playful.  This is the same connection that I will make with many children in the upcoming days.  I immediately reached down and began to feed him with the hay that was on the ground, just outside his reach.  He took it from me and ate.  I choked back my tears and photographed him twice…for me.  Hussein was all puffed up and proud that he delivered an elephant to me to photograph.  I couldn’t hide my discomfort at the sight of a tied up elephant but I was careful not to judge or condemn.  Then he pointed to another elephant who he said was very sick when she came and is now very healthy.  I smiled and told him how good it was to know she was being taken care of and allowed to live outside of a horrible circus now.

Anxious to leave, I asked if we could return to town.  Hussein decided that I should now see the “mini/baby Taj” to sight see.  I was mildly irritated because he clearly had an agenda–he got out of the taxi and pointed to the entrance of the “baby Taj” (as he called it) and said, “Crystal, you go take photo of baby Taj” while he met with some friends outside the gate.  Ok, Hussein, you are clearly the boss.

I attached a few photos of things that inspired me on this walk around a beautiful garden and the baby Taj.  It was lovely and I didn’t regret paying for entry.  Quite frankly, I was happy to be walking on my own for an hour without Hussein barking at me to take photos or a stranger trying to sell me something or beg me for money.

After all this, I needed a break and I welcomed the opportunity to ditch Hussein for a few hours and eat lunch in my lovely, truly air-conditioned hotel room.  We agreed to meet at 1700 to photograph the Taj at sunset (from a garden spot he told me about).

The gardens proved to be quite beautiful and a perfect spot to see the Taj Mahal.  I hate to admit it but it’s just a beautiful building to me.  Nothing more, nothing less but I certainly do not get the “wondrous” connection that many others do.  I’m much more enamored by living, breathing people. You can see by my cheesy photo that I indulged Hussein by pretending to “hold” the Taj in my fingers (yes, he insisted) before leaving for yet a few more shopping excursions that I did not request.  As all taxi drivers here do, he drove me to places that his friends owned in hopes that he would bring them business and they would owe him a favor.  Sorry, Dude, you caught me at the worst time…not only am I in the middle of an overseas move, I have recently embraced a no-clutter mantra in my life and have chosen to live more and buy/own less.  I’m proud of myself for holding my ground in spite of all the determined salesmen who tried to impress me with their wares.  I returned to my hotel with NOTHING!  Success.  As we are driving back to the hotel, he asks me if my hair color is natural and when I told him, yes, he replied, “are you sure?” “Yes, I’m sure, is yours?” I quipped.  “How old are you, Crystal?””How old are you, Hussein?”  As my English friend would say, this guy has more neck than a giraffe!

When he returned me to the hotel, he informed me that I did not tip him enough when he dropped me off–asswad!  Seriously!?  We never negotiated a price for the day (another rookie mistake) so I gave him more than I paid the driver in Delhi and then some…so, I told him that I would pay more tomorrow if he picked me up and made sure I got train tickets to Banda.  He agreed.  After that hair color comment, he is lucky he got any tip!

2 thoughts on ““Crystal, I take you to see animals today.””